Chromium (Cr) is the seventh most abundant element, but minerals containing chromium are not wide spread, with most of the high Cr ores deposits being found in Africa. Chromite is the most common ore containing Chromium, with an empirical formula of FeCr2O4. The Cr and Fe are present in Chromite in the +3 and +2 oxidation states respectively, which is why it is best written and thought of as Cr2O3FeO. Cr is present in soil at concentrations ranging from 5 to 1000 ppm.

Chromium is most commonly used in alloys, steels, pigments, and chrome plating. Chromium is often described as having slow kinetics. Many of its forms are difficult to dissolve and it reacts slowly with ligands like EDTA making it's wet analytical chemistry challenging.

The most common oxidation states for Cr are 0, +3 and +6. Chromium is most commonly found in the +3 state, which is fortunate since the +3 state is considered benign as opposed to the +6 that is toxic.

At Inorganic Ventures we note the oxidation state of chromium in a given CRM by writing Cr+3 or Cr+6. We are not quite sure how this got started since it appears to be most confusing to the user that wants the "form of chromium present after sample preparation". The most common form after most sample preparations is +3, much the same as it is +3 for Fe, with the difference that we do not write Fe as Fe+3 , but just Fe when describing aqueous CRMs containing the element. Unless the analyst is in need of a CRM containing Cr+6 it is best if the Cr+3 is used, however, there are specific methods for the determination of 'hexavalent chrome' where the Cr+6 state is need. 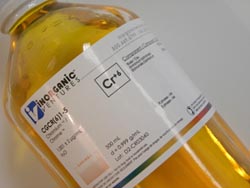 Chromium is determined in a wide range of environmental, biological, agricultural, metallurgical, and industrial (chemical industry) samples. Samples containing chromium are not particularly hazardous unless they contain high levels of Cr+6. The greatest risk with sampling and handling of these samples is a very real risk of contamination. The following precautions should be considered:

The risk of contamination is greater for Cr than most analysts are aware. Trace analysts are very aware of all the contamination problems associated with elements like Na, Ca, Al, Si, Fe and Zn, but Cr is often overlooked. For more on sample contamination risks see chapters 8, 9 and 10 of the Inorganic Ventures 'Trace Analysis Guide':
http://www.inorganicventures.com/environmental-contamination

The Metal and Alloys

Fusion methods that have been reported include:

One gram of sample is treated in a Pt dish with about 10 mL of HF and 2-5 mL of concentrated H2SO4. The silica is expelled as the volatile fluoride and the HF is driven off by taking the solution to dense white SO3 fumes. The residue is extracted with hot water containing a little sulfuric acid. Any undissolved residue may be brought into solution by fusion with NaHSO4.

The above fusion with Na2CO3 and KNO3 is recommended.

Ashing of organic materials, foodstuffs, plant, and blood and sewage sludge, as a preliminary decomposition step, is not suggested for samples containing Cr due to the refractory nature of the oxides. If ashing is used, it is suggested to keep the temperature low (400 to 450 deg C max) and to use an ashing aid such as high purity sodium carbonate or magnesium nitrate. Acid digestions using nitric, perchloric and sulfuric acids are suggested. Wet Ashing is suggested for oil and petroleum products using sulfuric acid in combination with magnesium nitrate as an ashing aid. Do not use ashing temperatures above 450 deg C. If sulfuric acid is added to the petroleum sample, then heat on a hot plate slowly, until foaming stops and a char is produced, wet ashing is very time consuming but it is a common practice in the petroleum industry. For more on ashing please see the following paper: http://inorganicventures.com/ashing-sample-preparation-procedures

Chromium is listed in the scope for EPA Methods 3050A and 3050B (Open Vessel Acid Digestion..) and 3051 and 3052 (Microwave Assisted Acid Digestion) and these methods are suggested for environmental samples (sediments, sludges, soils and oils).

Samples containing mid to low ppm levels of Cr can be digested with nitric/perchloric. Only use trace metals grade acids due to contamination issues. For more detailed information about acid digestions of organics please see the following article: http://inorganicventures.com/acid-digestions-of-organic-samples

Chemical compatibility, stability, preparation, and atomic spectroscopic information is available by clicking the element below. For additional elements, visit our Interactive Periodic Table.