Inorganic Ventures will be closed Thursday (11/26) and Friday (11/27) in celebration of the Thanksgiving holiday. 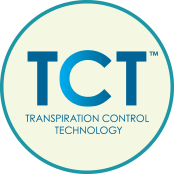 Transpiration and how to stop it.

A problem that has gone relatively unnoticed when achieving reliable measurements is that of transpiration. Transpiration is defined as the passage of vapor from within a container to the outside. Transpiration is a systematic error that increases the concentration of a solution as time passes.

Over the past 20 years, Inorganic Ventures, a manufacturer of inorganic standards and custom certified reference materials (CRM), has studied the issue of transpiration and how it becomes a problem when solutions are stored for long periods of time.

Through our research, we have developed new Transpiration Control Technology (TCT) bags for product shipping. The TCT bag effectively stops transpiration and extends the shelf-life of CRMs.

In order to better understand how these bags work, we first need to address the problem, and the research that led to this new technology.

Our research focused on low-density polyethylene (LDPE) containers, as LDPE is the primary container material for Inorganic Ventures products. (Click here for more information on the benefits of LDPE). 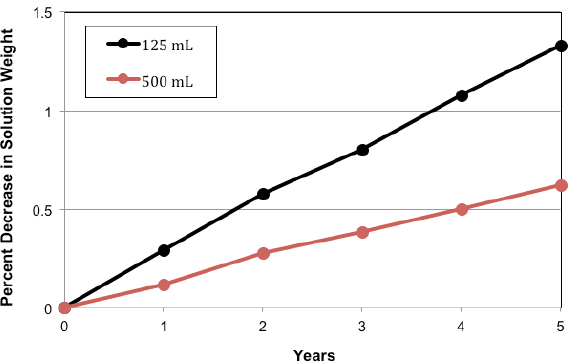 Figure 1: Effects of transpiration for 125 and 500 mL LDPE bottles.

We first thought the transpiration was occurring through the container walls, but no correlation was found that would explain the different transpiration rates. However, it was discovered that there was a correlation between the rate of transpiration and the circumference of the bottle opening.

This initial study concluded that the transpiration rate was proportional to the ratio of the circumference of the opening to the surface area of the solution. This suggested that transpiration occurred around the bottle opening and not through the container walls. In light of these findings it was determined that additional transpiration studies were needed to better define the transpiration mechanism.

In additional studies we wanted to further investigate how bottle size affected transpiration, as well as examine the effects that variables such as bottle fill level and frequency of opening might have on transpiration. LDPE bottles of 30, 125, 250, and 500 mL capacity were used, and results confirmed that smaller bottles transpired faster (Fig. 2), as did half-full bottles and bottles that were opened repeatedly (Fig. 3). 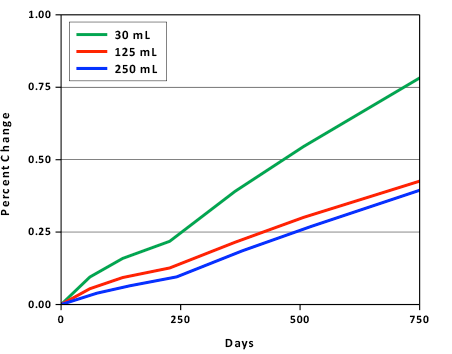 Figure 3: Relative transpiration rates for 125 mL LDPE bottles under different storage conditions. “No seal” or “Sealed” refers to heat-shrink wrapping around the bottle cap. Note that transpiration significantly increases when the bottle is half-full or opened repeatedly.

The results for all bottle sizes were consistent with the findings from the previous study, so the question then became: What factor is proportionately affecting the rate of transpiration?

A comparison of the transpiration rates for all of the bottles compared to the ratio of the circumference of the opening to the surface area of the solution (Fig. 4) revealed a correlation that fit to within 6 percent relative, suggesting that transpiration around the cap is the dominant mechanism. 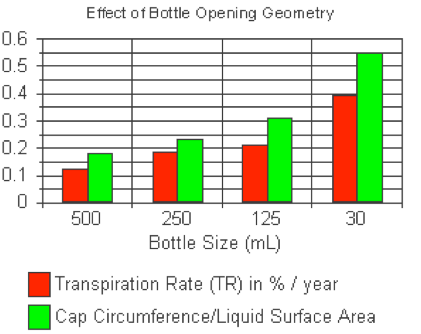 Figure 4: Bottle transpiration rates compared to the ratio of the bottle opening circumference to the solution surface area.

Additional support for this argument is illustrated by the fact that there is a near perfect correlation of transpiration rate to bottle opening geometry and no correlation to the bottle surface area (Fig. 5). 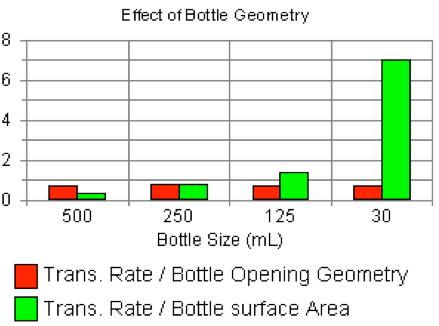 Recognizing the significant effects of transpiration and the potential impact upon the shelf-life of CRMs, Inorganic Ventures began investigating ways to prevent transpiration from occurring. Possible approaches include refrigeration, which slows transpiration, and single-use sealed glass ampoules, which stop transpiration. These solutions have limitations, as not all labs have access to refrigeration, and glass containers are not as clean as plastic or as chemically resistant to certain types of acid.

Searching for an alternative, we observed that NIST has been providing Standard Reference Materials in sealed aluminized bags for many years, and the TCT research program began examining bags of similar design and materials.

IV studied several different bag designs and materials in an effort to control transpiration. We found that re-sealable bags didn’t work, nor did heat sealed plastic bags. The important factor was that the bag needed to have an aluminized layer to prevent transpiration, and through years of research our understanding of the technology has matured to where we are now able to effectively address the systematic error introduced by transpiration.

The key to Transpiration Control Technology is a heat-sealed aluminized bag that effectively stops transpiration (Fig 6). Certified Reference Materials stored using TCT have a shelf-life that is limited only by chemical stability. 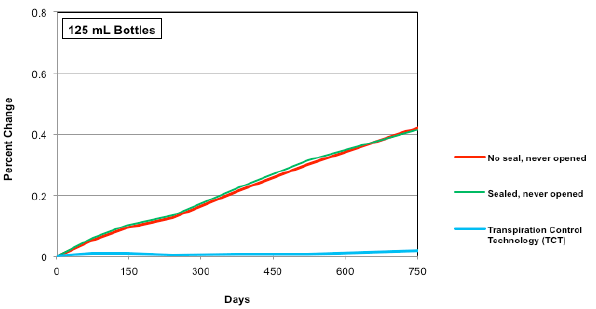 Figure 6: Percent change in solution weight due to transpiration for 125 mL LDPE bottles. “No seal” or “Sealed” refers to heat-sealed shrink wrapping around the bottle cap. Transpiration Control Technology effectively stops transpiration and extends the shelf life of CRMs.

What does this mean for the end-user?

This development addresses the last major concern regarding the shelf life of a CRM. TCT extends shelf life indefinitely, as the product doesn’t expire until one year from the opening of the TCT bag, or upon lot expiration, whichever comes first.

Concerns about shipping or storage conditions are eliminated, as transpiration is no longer an issue, which saves cash money, and simplifies research by removing the need to constantly inventory and restock CRMs.